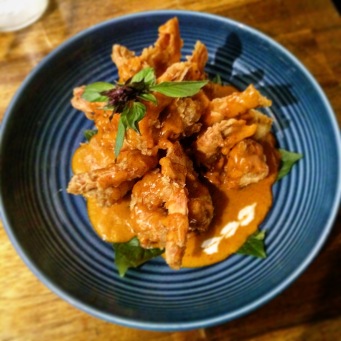 How would you feel if you just opened up your first ever restaurant, a Thai restaurant, only for someone to come along and open another Thai restaurant weeks later, literally just down the street from you? Having only opened around five months ago, that’s exactly what happened to the owners of Social Street S2 on Hutt Street.  Restaurants can be a risky business like that, but the three owners of Social Street S2 have taken it in their stride and soldiered on serving the best food they can and providing top quality service.

From the outside, the place looks quite small and narrow but there’s also an upstairs area, where we were seated. It’s simple tables and chairs with black on white street scenes painted on the walls.  I’d heard that the food was good here so I was keen to give it a try. The chef’s from Bangkok and I have to say, it was a good meal.

I’m a fish cake fan so we started with a serve of those – it’s a bit of a benchmark dish for me. Served with cucumber and peanut sweet chilli sauce, they were a good size and good texture, with chunks of fresh green beans. They tasted like they were homemade (in a good way), in fact, quite like the ones that I learned to make in Thailand quite a few years ago.

The second entrée we had was the Sea Flowers – chicken, squid and prawn in a light red curry sauce. A pretty dish and delicious. The pastry was surprisingly quite thick, but not at all stodgy.  Then there was the bowl of the Tom Yum soup.  We went for the vegetarian option and it was filled with lots of fresh veggies and tofu. With all of the soups you can order at different levels of heat…Mild, Medium, Traditional, Extreme and Freakin Hot.  We went for the ‘Traditional’ heat and blimey, we were so glad we didn’t go any hotter – I tell ya… it was HOT!  And we’re not shrinking violets when it comes to chilli. You have been warned!

Onto mains – of course we had to try the Pad Thai with chicken (the other benchmark dish). I’ve had a couple of good Pad Thai’s in Adelaide of late – the best, in my opinion, at Sukhumvit Soi 38.  Social Street’s is very good too – cooked well and certainly a generous serving (and we only had the smaller size given all of the other food we’d ordered between two of us).  My only criticism is, I found it a bit too sweet.  I was pleased with our other two dishes and they contrasted well.  Firstly, the Chu Chee Prawns – crumbed king prawns in a curry sauce, a sauce not dissimilar to the sauce that came with the Sea Flowers.  I really liked this dish – presented well, with a nice crisp crumb. The Basil Beef was colourful, fresh and full of flavour.

Social Street S2 gets the thumbs up from me. It’s generous serves of colourful, tasty food and we had excellent service from two of the owners, Cheng and Tian. 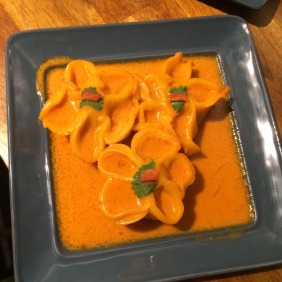 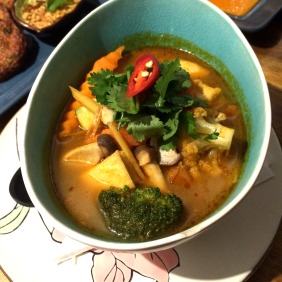 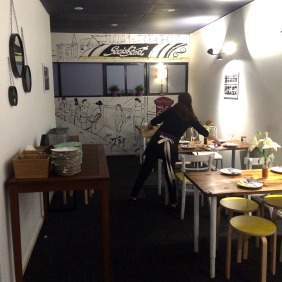 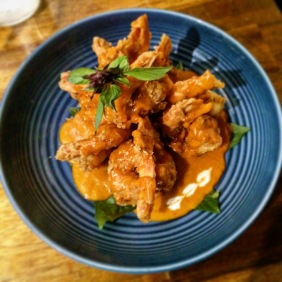