A DAY IN THE KITCHEN – Luigi Delicatessen

Posted on December 14, 2020 by Jacqui's Food Fetish Leave a comment 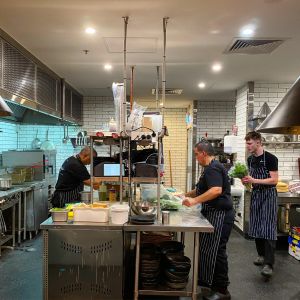 Luigi Di Constanzo opened Luigi Delicatessen in 2014. Born in Naples, Luigi has the love of food, wine and the joy of bringing people together running through his veins. He’d long dreamed of opening his own place to serve good Italian food made with love and provide good old-fashioned service with a smile.

On opening, Luigi’s mother, ‘mamma’, was the hub of the kitchen arriving early in the mornings to make all the Italian classics including lasagne, meatballs and parmigiana. Luigi’s also done his time in the kitchen. Fast forward to 2020 and it’s now in a new location (43 Franklin Street) with Head Chef Johnny Triscari. I’m a big fan of Johnny – I really enjoyed the food he was serving up at Chloe’s. And he tells me that the two places couldn’t be more different, going from formal and structured fine dining to a menu that changes every day – a 180 degree change. Now, it’s all about sourcing whatever’s best and freshest each day and creating dishes that use traditional cooking methods, are tasty and presented in the way they would be in an Italian family home.

I stumbled upon Luigi’s by accident – having just finished a meeting a few doors down, I was just after something close and quick – and what I got was a surprisingly good spaghetti marinara! I looked down into the kitchen and there was Johnny and we organised for me to spend a day in the kitchen.

This day, it’s Johnny, Dinesh Poudel and Bailey Tomney. Their day starts at 6am as they prepare all of the ready-to-go food for the deli where you’ll find bagels, wraps, croissants, cakes, tarts and biscuits. Donna, pastry chef, comes in twice a week. Open seven days, breakfasts are popular, particularly Saturdays and Sundays, as are Friday night dinners.

Front of house today consists of Justin, Hugo, Dom, and of course, Luigi. Dom has been at Luigi’s for six months. It’s his first hospitality job and he’s loving the contact with customers. Hugo’s from Sydney and, according to Justin, a cocktail guru, having 17 years of bar experience. Justin has always been into coffee and is a full time barista, responsible for starting Kicco. He loves getting to know his customers and likes the personal touch – and there’s a lot of customers – on a good day they can do 400-500 coffees! 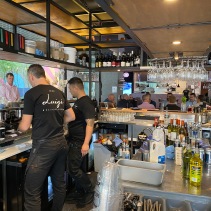 With an ever-changing menu, Johnny tells me that he often comes up with ideas for new dishes the night before, and, given the number of people that come through the doors, they need to be dishes that can be prepared and served up quickly. For him, it’s all about simple food that is flavour-driven. Given the close proximity to the Adelaide Central Market, it’s easy for the chefs to quickly run over to get anything they’ve run out of or forgotten to order in. At the same time, they keep an eye out for any seasonal produce that inspires them. This week it’s figs and yellow peaches. Johnny loves supporting small local businesses and sources his meats from a small family butcher in Erindale including ‘killer bacon’ and gets free range eggs from a family business in Reeves Plains.

Dinesh has been at Luigi’s for 4 years, starting out as a kitchen hand, he tells me that Luigi is the guru of Italian food and has taught him everything he knows. He spends his time on the pans and loves working with Johnny who gives Dinesh the title ‘King of Pasta’. Bailey is from Wallaroo and is a second-year apprentice who has been at Luigi’s for 2 months. He’s currently responsible for general prep and preparing the breakfast boards.

I appreciate that Johnny’s arranged a number of tasks for me – he wanted to give me a taste of the full kitchen experience. I start by preparing kale leaves – cutting the leaves from the centre stems. Yep – I can do that! Then, it’s helping Dinesh make their ‘famous’ light and fluffy gnocchi. I get to witness the whole process right from the beginning – from boiling the potatoes to rolling and cutting the mixture. It takes me about three attempts to be able to roll it properly – a higher degree of difficulty than the kale prep! Then I get to dunk the whole octopus into boiling water – not once, not twice, but three times, tempering the water, and then for the first time in a restaurant kitchen I get put on the pans to brown the shallots and chicken thighs for Johnny’s dish of the day, Pollo alla vino rosso. 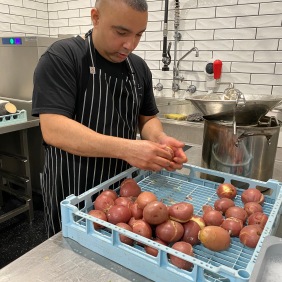 Peeling the potatoes for the gnocci 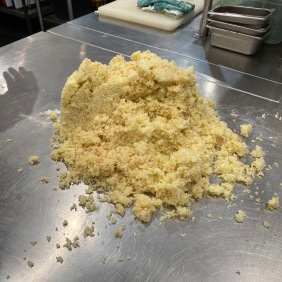 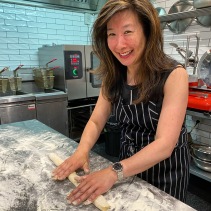 Rolling out the gnocchi dough 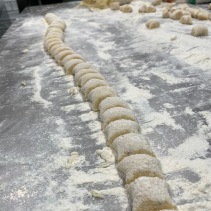 In the middle of this prep, Johnny and I make a dash to the market as he’s forgotten to order shallots. While we’re there, he spies bananas going cheap so decides to buy 15kg to make banana bread. I end the day in the best way – sitting down to a dish of squid ink pasta alle vongole and a glass of vino.

Make sure you pay a visit to Luigi’s and say hello to the team. They’re all passionate about what they do and importantly, you’re assured of a tasty Italian meal. 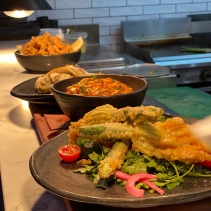 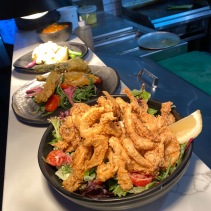 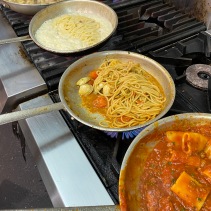 Pasta on the go 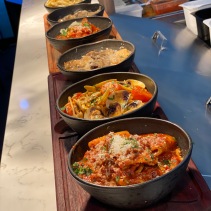 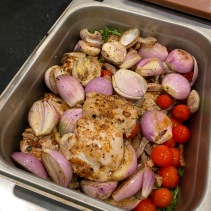 The chicken dish ready for the oven 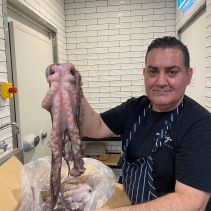 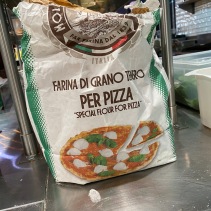 Johnny checking out the market produce