Posted on January 26, 2016 by Jacqui's Food Fetish Leave a comment

Here’s a place I’d been curious about – the new restaurant taking over the large space formerly occupied by the Hilton’s The Brasserie and what used to be The Grange where I used to enjoy Cheong Liew’s food.  And now it’s here – Coal Cellar and Grill. It was all a part of the major renovation of the Hilton Hotel’s ground floor and in keeping with the philosophy of the restaurants that came before it, it’s highlighting South Australian produce. Foods are cooked primarily over the charcoal grill and the rotisserie and there are over 500 wine labels for the drinking.

It’s nice to see that Atef Yousef is still the front man here – greeting everyone in his amiable and professional manner.  Atef is a well-known face here at the Hilton, having worked at both The Grange and The Brasserie, and it just wouldn’t be the same without him.  We were shown to a nice corner table at the window.

There were four of us for dinner this night and we decided to share four entrees to start:  Venison, cauliflower, ocean trout and kingfish. Before I get to the positives, I’ll mention what we found a little disappointing.  Firstly, the Venison Bresola with pear, smoked macadamia granola, madeira-truffle dressing.  The venison was too salty for our liking.  Secondly, the Wood oven roasted cauliflower with cracked green wheat, dried apricot, almond gazpacho, grapes and tamarind masala dressing sounded fab, and it almost was.  The flavours were good, but the cauliflower was too soft and there was no hint of crunch nor enough char – it was more like it had been steamed.  However, let’s forget about that – our other two entrees were really good!  The concept of Squid ink ocean trout with horseradish crème fraiche and beetroot, lemon myrtle tapioca intrigued us.  It arrived under a smoke-filled glass dome which, when lifted, revealed a beautiful looking, delicate dish.  I’ve never seen squid ink used that way before.  And the winner of the entrees was the Seared Kingfish with lime leaf and thai basil, roasted peanuts, fragrant potato.  This was magnificent by way of both flavour and texture.  I’d definitely order these two dishes again.

For mains, my partner and I ordered the Caab Tomahawk Steak – for 2 to share with a trio of mustards, charred courgettes and red onions.  We love a good Tomahawk and this didn’t disappoint – we really enjoyed it.  It was beautifully cooked medium-rare and succulent.  Our friends also enjoyed their mains – the Heritage strip loin and the SA Gulf prawns.  Our side of Green asparagus, parma ham crumbs, hollandaise which were perfectly cooked, but the crumb was so fine, it actually tasted a bit sandy but the Parmesan truffle fries, herb and truffle aioli were excellent!  The were super truffley and delicious!

The service from our waitress, although friendly enough, wasn’t quite up to the standard I’d expect from the Hilton. In summary, there were some high highs but also some lows, but overall, a good meal and a positive experience.

Lifting the glass dome on the Squid ink ocean trout 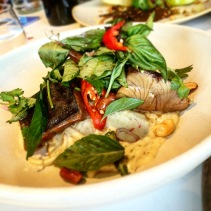 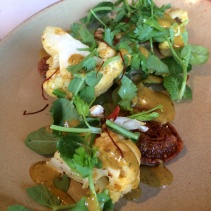 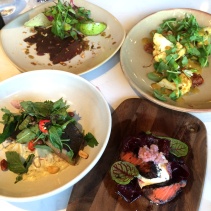 Caab Tomahawk Steak – for 2 to share with trio of mustards, charred courgettes and red onions 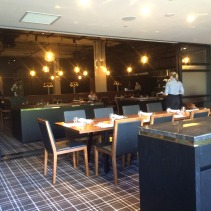 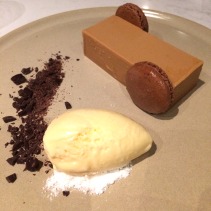 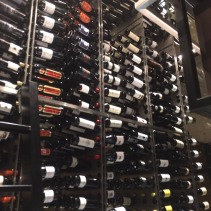 Taken from inside the glass cellar