A DAY IN THE KITCHEN – The Bridgewater Mill

The Bridgewater Mill is an old flour mill that was purchased and renovated in the eighties via Brian Croser, former Petaluma winemaker. In 2015 it was purchased by Warren Randall who is now leasing the Mill to catering group Taylor & Holmes, run by Greg, Kate and Tori Hobby. I’ve always liked the Mill and remember some superb meals there in the Le Tu Thai days.

More recently I’ve been singing there on the odd Sunday afternoon so have gotten to know the team, including Head Chef Ben Fenwick, who kindly agreed to have me spend a day in the kitchen. We arranged this for a Monday. Mondays are a slower day in terms of lunch trade so this day it’s only Ben and Abby. The rest of the team consists of Sous Chef Haley Wilkinson who’s joined from Little Wolf at Mitolo, Christine and Billy. It turns out that while Haley’s not rostered on this day, she’s out in the dining room enjoying lunch.

The kitchen team members generally work four-day weeks. On two of those days they’ll push through the double shift and the other days, do a single shift (either lunch or dinner). A typical day starts around 9am and after a lunch shift they’ll head off between 4-5pm. After a dinner they’ll head home around 10pm.

Ben’s been Head Chef at the Mill for coming up to two years. As a teen, after he’d finished TAFE and six months work experience in Adelaide, he moved to the States with the aim of working at Michelin Star restaurants – which he did, including those of Alain Ducasse and Joel Robuchon. Eventually feeling homesick, he returned to Adelaide, spending time at Press, Bird In Hand and The Pot.

The kitchen set-up consists of The Pass where all the plating up of hot dishes is done, the Hot Section – cooking in the pan and on the grill. Abby’s, who’s a year out of culinary school, is looking after the Larder section – cold dishes and desserts, and today she’s also doing some deep frying – mostly brussels sprouts and oysters. When I arrive, she’s busy making wholemeal sourdough rolls for lunch, and putting together bacon and egg rolls for The Little Cog, the Mill’s coffee shop.  Christine also spends most of her time in the larder section. Generally everyone sticks to their section but Ben and Haley swap around a bit.

Egg for the egg and bacon rolls 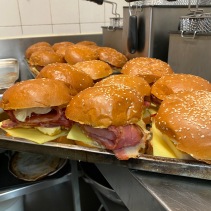 Egg and bacon rolls for The Little Cog coffee shop

Ben and Haley work well together. Ben feels that in any restaurant the position of Sous Chef is probably the hardest job, having to work so closely with the Head Chef – you must be in tune with each other’s styles – he likens it to a husband-wife relationship.

I asked Ben how he’d describe his food. While he’s reluctant to put it into any specific category, it’s probably best described as contemporary Australian soul food. He doesn’t tend to follow any rules – just cooks what’s good and what he’s passionate about. He’s experienced in classic French techniques but he’s not afraid of fusion. Sharing of dishes is encouraged and it’s a lot more relaxed and casual than the former fine dining days. He develops his dishes by starting with a core element that he wants to hero then building around it – finding ways to make it ‘wow’.

The menu is changed seasonally but they tweak regularly based on produce availability. When asked if he has a signature dish, Ben’s answer was no, but his beef tartare in soy caramel with pickle, kewpie and crisp shallots has been on the menu since day one. Here’s some examples of his dishes: 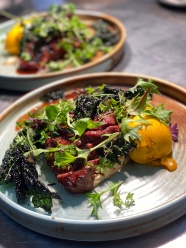 And while the kitchen to me looks rather spacious, I’m told there’s not a huge amount of usable bench space and the layout isn’t ideal – but the good news is that a new kitchen is being built and it will be twice the size! There’s a garden at the Mill where they can source some of their produce but they can’t really use it much during winter as it often freezes over.

My first job of the day was to help make focaccia – something new to me! I’m not really a bread eater so I’ve never ever attempted to make any type of bread before. Surprisingly, it wasn’t too difficult at all. I measured out the ingredients and mixed it with the KitchenAid stand mixer (never used one of those before either!). This was then put in a tray with olive oil and left to rest before going into the oven. The next job was to help make the delicious kimchi romesco which is served as part of the pork belly dish. Kimchi, veggies and lots of cashew nuts – my second encounter with a Thermomix. If it gets stuck, just give it a good ol’ shake, I’m told. Then, onto the celeriac – peeling and chopping to make a puree to go with the ricotta gnocchi.

Me – making focaccia and using a KitchenAid – who would’ve thought!

Ben tending to the focaccia

The focaccia straight from the oven 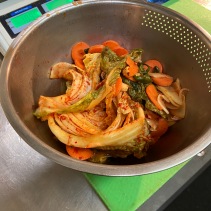 The makings of the kimchi romesco

Kimchi romesco after being blended with cashews

Celeriac ready to be peeled and chopped

Diners start to arrive for lunch and I get to see some action as the orders are prepared and plated up. There’s steaks and greens on the grill, there’s brussels sprouts in the fryer, quenelles being made – it’s fascinating. It all remains very calm – you can tell they’ve done this thousands of times before. Tom and Restaurant Manager Symantha are coming in and out to collect dishes as they become ready. Abby tells me she loves the pressure of service. Given the option of any dish I wanted for lunch (a damn difficult choice), I chose the pork belly but it all looked so good I made a booking then and there for the following week for lunch – so many dishes I want to eat! 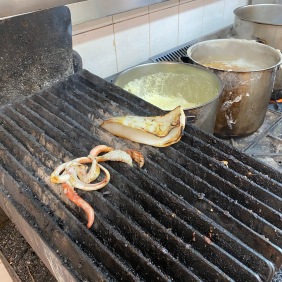 Squid on the grill

Plating up on the pass

Beef strip loin being basted on the grill

Culture is a huge thing at the Mill. Greg and Kate, who live on the property, work hard at maintaining a great working environment and it shows, from the kitchen to the dining room. You can tell they’re a happy bunch who enjoy their work, and the kitchen team is given the trust and freedom to do their thing. Greg’s all about giving diners a memorable experience with great food and warm service.

Ben’s dishes are simply full of flavour – I love his style of food. If you haven’t been to the Mill for a while, you really should book in and enjoy the experience. I’m grateful for another really enjoyable day in the kitchen. 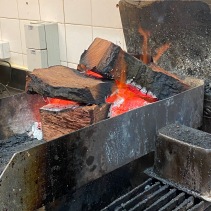 Firing up the grill

I love how organised this is 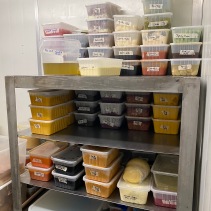 My OCD really appreciates this!

View of the kitchen

Preparing oranges for the squid dish 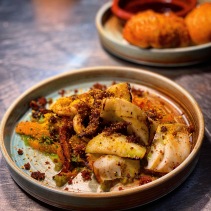 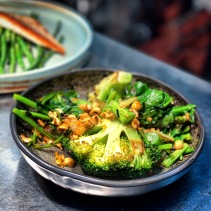 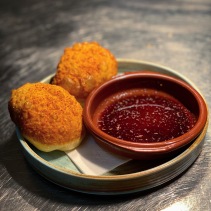 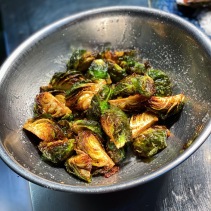 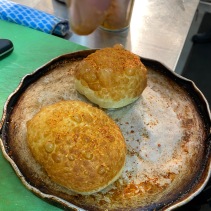 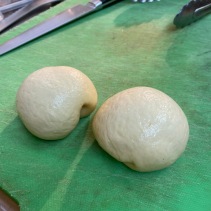 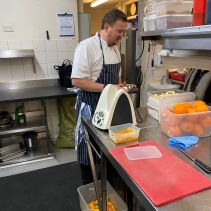